My cousin Emily’s first baby is due in 12 days!! Emily is more like a sister than a cousin to me, so when she first told me about Baby I knew that I was going to be one of the ones, with Emily’s sister Lucy, who got to plan her family baby shower.  Since we, as extended family, don’t get to see each other much we decided to make it a coed shower, with the kids too. 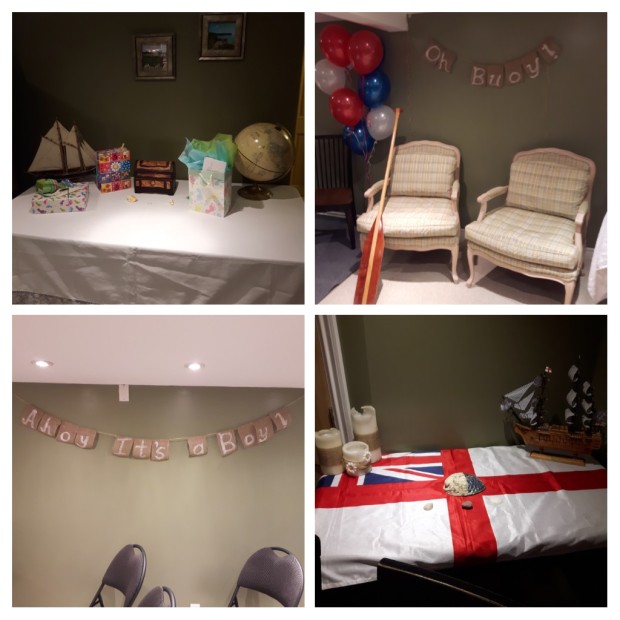 Baby boy’s room is decorated in a nautical theme, so Lucy had the brilliant idea of having the baby shower be nautical too.  Along with the rustic nautical items, we accented with twine and white. Lucy brought awesome balloons and I made the banners, but most of the decorations I collected from around my house.

The nautical items I had were:

The white items we used were:

The twine items we used were:

*For the games I put every guest’s name in a jar and made teams by picking people out at random. We didn’t let spouses go together.

This one was really just an ice breaker to get everyone into their silly moods. Connect two spoons together using a piece of string (about 2 feet). Divide into teams (we had 5 teams of about 6). The goal is to get the spoons threaded through the inside of each team member’s clothes. We just did shirts, but even that was hilarious. The first team to finish is the winner. This game went really quickly, so we did the best two out of three. The prize was a chocolate bar each.

Games: Baby The Price is Right

To make this game all you have to do is get baby items (or borrow from someone who already has them), find out how much they cost originally and where they were purchased from.  Draw out 4 names, have them sit or stand in a row, in the order they were drawn. Show them one item. I displayed everything on a table, covered it with a table cloth (and put a flag on the car seat because it was too obvious) then uncovered them one by one so they wouldn’t know which item they would have to guess. For example, one item we used was a sippy cup from well.ca. It was $17.99. Each contestant has to guess how much the cup cost, without going over. Whoever is the closest is the winner. We had one contestant guess one cent over the amount! Remember who wins the first five rounds and let them all compete for the last round to have a final winner. The prize for this was a cookie mix jar that I put together. I figured this was a practical gift that would be suitable if a man, woman or child won it. I found the recipe at Cuter by the Dozen. 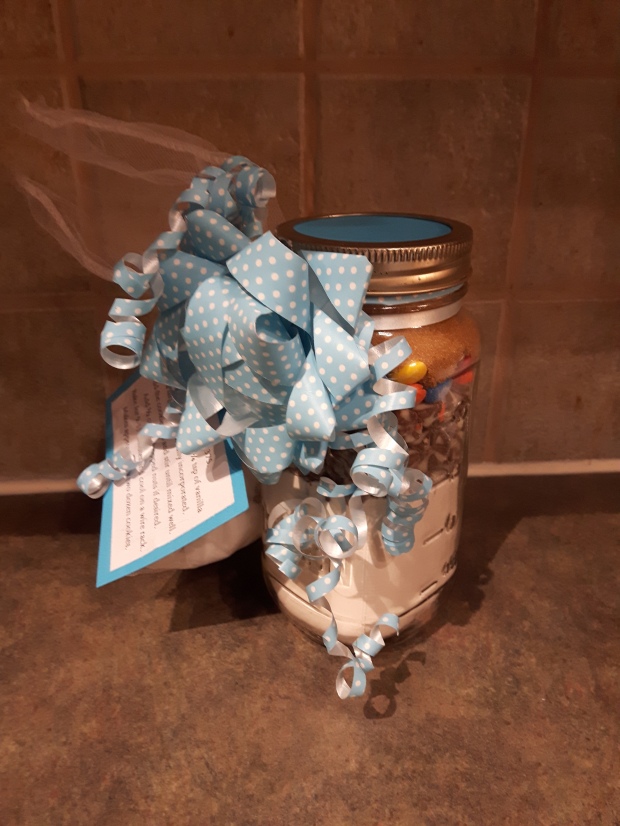 The items we used were baby food, a Dr. Suess book, sippy cup, car seat, recieving blanket and a toy. The items ranged in price from $1 to over $300. I put each correct amount inside a flap so I could reveal the amount once everyone had guessed.

I originally found this game at Fun Baby Shower Games, where you can print off the clues. I made it for another baby shower, and got the chance to reuse it for Emily’s shower. For this one divide into teams (we did three) and let the teams discuss their answer for a couple seconds before they give it.  Have someone ready to see which person’s hand was in the air to answer first. We had some contestation over that when all the kids who were supposed to be helping me suddenly disappeared. Oops! I added a final Jeopardy questions just for the fun of it. It was, “In September of 1855 Carmelina Fedele gave birth to the heaviest baby on record, who weighed this much.” The answer (I mean question?) is, “What is 22lbs 8 oz?” I probably should have made it a bit easier, made the answer the country (Italy) instead of such a specific weight.  Oh well. Plan and learn.

After the games we enjoyed a hearty hymn sing, a family potluck dinner and lots of socializing. Emily loved her shower, which is the whole point. All the feedback I got was positive and I had a blast too! Have you hosted or been to a nautical shower? Do you have some more ideas to share? Did you try some of these ideas? I’d love to hear about it! Let me know in the comments below.

Hi, I'm Jessica! I love to craft, and to host parties using things I've made. I love to share my crafts and to show you that you can be creative, too! Everyone can craft. I hope you enjoy your time here and that you can find some crafts or party ideas that you want to try out. For WAY more information about me click on the About heading. View all posts by butfirstwecraft

But First We Craft

But First We Craft